PJX optioned the Gold Shear Property that hosts the high-grade David gold occurrence in 2018 and has since acquired 100% of the mineral rights.

According to B.C. Ministry of Energy Mines and Petroleum Minfile data, gold was first discovered in 1990 when an exposure of gold-mineralized quartz veining within a shear zone was chip sampled across 40 centimetres and assayed up to 144 grams per tonne (g/t) gold. The shear zone occurs within quartzites and siltstones of the Middle Aldridge Formation and has been traced along strike for 1600 metres and 150 metres downdip. The shear is also reported to contain anomalous gold values over this entire length.

“Drilling outlined one continuous zone of gold mineralization over a strike length of 150 metres and to a depth of more than 100 metres; thickness averages 2.35 metres. Inferred resources for this zone are 96,000 tonnes grading 13.08 g/t gold (uncut) or 7.11 g/t gold (cut). (Property Development Report by Bapty Research Ltd., 1991).” (quoted from the B.C Ministry of Energy Mines, and Petroleum Resources’ Minfile Record Summary (082FSE108). This gold mineralized zone is called the David Gold Zone.

Prior to PJX, the David Gold Zone on the Gold Shear Property was last explored and drilled in 1996. Approximately 70 shallow holes were drilled from 1990 to 1996. The potential of the property is considered to be significant given the strike length of the shear, the shallow depth of historical drilling, the good gold grades and apparent continuity of the David Gold Zone.

Rock grab samples, taken by PJX, support the high-grade characteristic of gold mineralization reported by historical drilling and trenching on the David Gold zone. Seven of 12 grab samples taken at surface from the David Gold Zone trench have returned gold grades over 68 g/t with the highest being 193.9 g/t gold, the latter having 5 grains of visible gold (see David Gold Zone map below).

In 2019, drilling by PJX confirmed the presence of high-grade gold mineralization.

Multiple phases of quartz veining occur within and adjacent to the main David shear in carbonate and sericite altered sediments. The main shear is anomalous in gold, in the 100s of ppb and varies in thickness from 1.2 to 4.5 metres true width.

PJX Hole GS-19-07 returned one of the best weighted average results for gold of 25.07 g/t gold over 2.1m true width across the David Shear.

Drilling has traced high-grade gold mineralization from surface down the shear for 100 metres.

Gold appears to occur as fine visible grains, and/or with base metal sulphides (lead, zinc, copper), and/or pyrite, in quartz-carbonate veins with sericite alteration.

PJX’s surface sampling and mapping suggest the David Gold Zone has a shallow plunge to the north along the David Shear.

Three-Dimensional Modelling of historical and PJX drilling in Leapfrog also suggests that the David Gold Zone has an apparent plunge or rake to the north along the David Shear (see longitudinal view).

The David Gold Zone is considered to host Orogenic type gold mineralization. The geochemical signature of the gold zone and locally associated minerals (aquamarine-beryl, K-spar) may also suggest an intrusive source for some gold bearing fluids. This supports the potential for a large system with potential for multiple deposits. 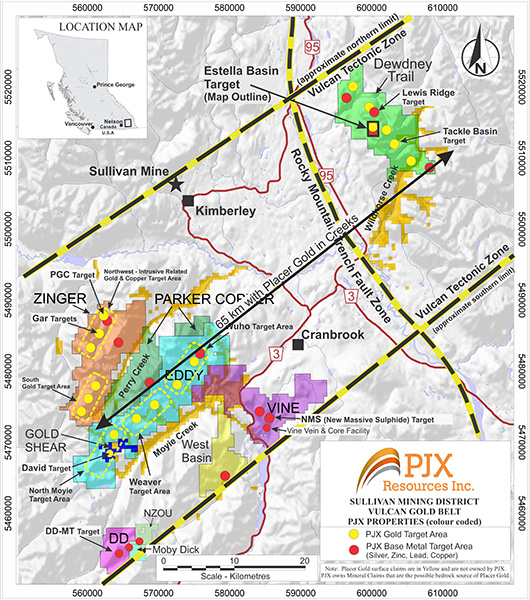 PJX Properties (colour differentiated) with over 20 gold and/or base metal targets along the 65 km long Vulcan Gold Belt in the Sullivan mining District. David Gold Zone in the North Moyie Target area is on strike with PJX’s Weaver Target Area on the adjacent Eddy Property 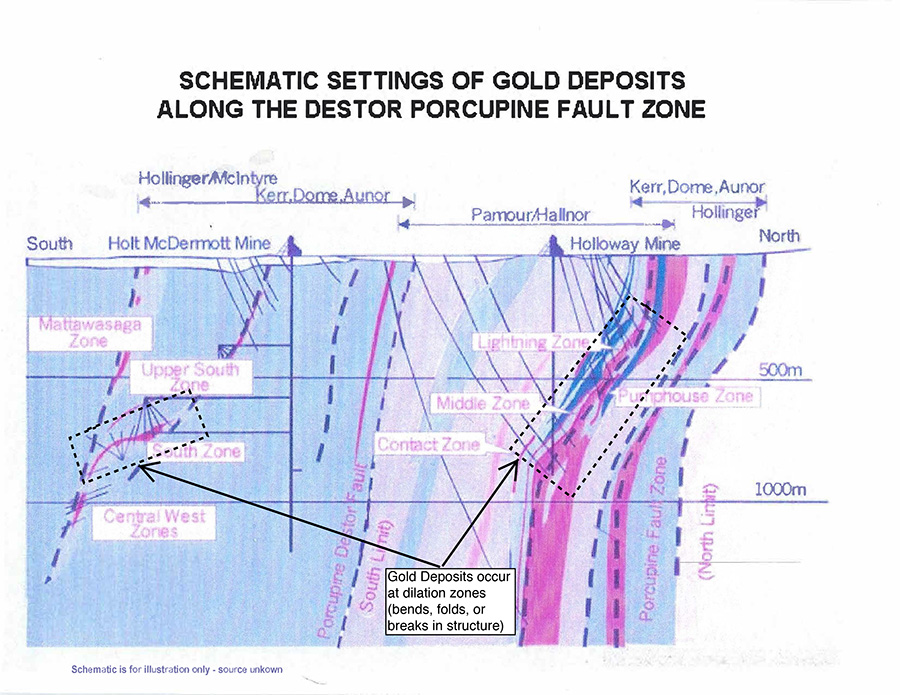