Additional detailed ground geophysics (see December 22, 2014 press release) has identified a large positive gravity anomaly that appears to correspond with the target sedimentary horizon called the Footwall Quartzite. Hole VA15-02 intersected a fault before reaching the Footwall Quartzite target horizon. Preliminary assessment of the data suggests that the target horizon is at depth beneath the hole.

Management believes that the presence of anomalous sphalerite mineralization with alteration and the identified gravity anomaly continue to support the potential for massive sulphides deposited within a basin at the target Footwall Quartzite sedimentary horizon.

Historical drilling in the early 1990’s by Kokanee Exploration discovered massive sulphide with zinc, lead and silver mineralization at the base of the Footwall Quartzite, approximately 1.2 km west of PJX’s hole VA15-02.

Based on these results the Company believes it has discovered a restricted third-order sedimentary basin which is considered an important geological environment often associated with Sedex deposits. This discovery is located approximately 35 km south of the former Sullivan Sedex deposit.

“In my 40 years of exploration experience in the area, it is rare to discover a third order basin and, in particular, one that contains sphalerite mineralization with alteration that supports the right geological environment for a deposit” states Dave Pighin (P.Geo) “In addition, the basin is located adjacent to a large regional structure called the Moyie Fault. The Sullivan deposit occurs in a similar geological environment adjacent to the regional Kimberley Fault.”

This new geological information and existing geophysical data are being used to refine target depths and locations in preparation for the next phase of drilling. Although mineralization seen in the core is not of sufficient concentration to warrant assaying, the anomalous mineralization supports the potential for a sulphide deposit being formed in the basin. Additional information will be placed on the PJX website when the assessment is completed.

“The property has excellent infrastructure. It is crossed by two power lines and rail with road access year round, and is only a 20 minute drive south along Highway 3 from mining friendly Cranbrook, British Columbia.” states Company President and CEO John Keating. “The rail line crossing the property carried zinc, lead and silver concentrate from the former Sullivan Mine to Teck’s Smelter complex in Trail, located about a half a day by rail away.” 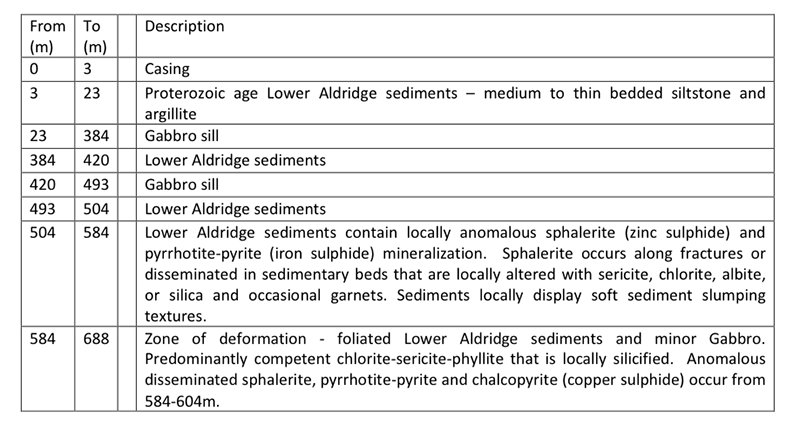 Localized slumping of the sediments, identified in core, suggests that active faulting occurred during sediment deposition. The presence of fracture controlled and disseminated zinc and iron mineralization with syn-sedimentary faulting are indications of a basin in which hydrothermal fluids may be rising along faults to deposit mineralization along or beneath the ocean floor. The basin appears to be capped by two gabbro sills. The restricted nature of the basin is also supported by the localized presence of the gabbro sills that do not occur to the west of the basin where historical drill holes intersected zinc-lead- silver mineralization at the base of the Footwall Quartzite. The zone of deformation with z-folding is considered to be one of the bounding faults of the basin that has been re-activated overtime. The zone was encountered before the hole reached the Footwall Quartzite target horizon which is believed to be at depth below the hole.

The foregoing geological disclosure has been reviewed by Mr. Dave Pighin P.Geo. (a qualified person for the purpose of National Instrument 43-101 Standards of Disclosure for Mineral Projects). Mr. Pighin is the Company’s consulting geologist managing the Vine drilling program.