The road-accessible Zinger Property is located 24 km west of Cranbrook, British Columbia and covers 10,000 hectares over a 20 km strike length of favourable geology with gold and copper deposit potential.

The 1860’s gold rush brought thousands of people to the Cranbrook area to placer mine the creeks for gold. To this day, small scale placer operations can be found along Perry Creek. Anecdotal data suggest that the Zinger Property was likely explored by prospectors for the bedrock source of the placer gold found in the creek as far back as the mid-1800s.

The earliest recorded work on the property was in the period between 1915 and 1921 on the Yellow Metal prospect.

Prospecting, geological mapping, soil geochemistry, and geophysics have since been carried out over various parts of the large Zinger Property. Sections of the property have been worked by a number of companies including Gallant Gold Mines Ltd. (1981),Trans-Arctic Exploration Ltd. and Fort Steele Grubstaking Syndicate (1985), Partners Oil & Minerals Ltd. (1987), Unique Resources (1987), Consolidated Ramrod Gold Corp. (1992), and National Gold Corp. (2000). 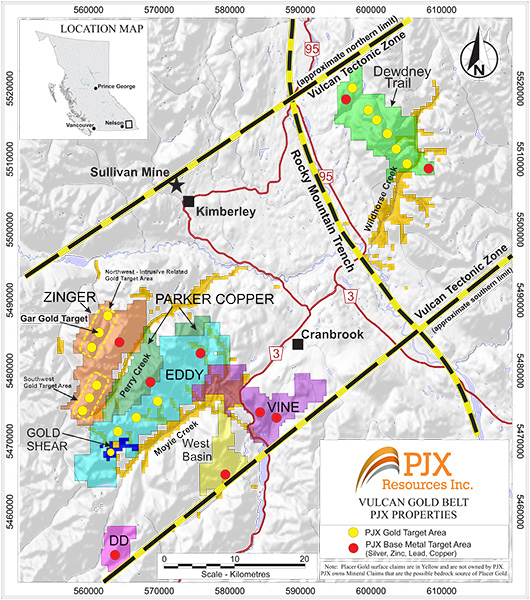 Since the start of consolidating the mineral title to the Zinger Property, PJX has compiled historical data, identified data gaps and infilled those gaps with mapping, prospecting, soil and rock geochemical surveys, airborne and ground geophysical surveys, and targeted drilling campaigns to help define and prioritize target areas.

Two large gold target areas have been identified to date. The South Target Area and Northwest Target area – see map. Additional gold and copper mineralization potential exists outside these 2 areas on the property. These other areas are at a less advanced stage of exploration.

Gold in rock grab samples associated with quartz-sericite-carbonate veining can be traced for over 6 kilometres. Gold values range from being anomalous to over 30 g/t.

The jntersection of F1 folding by a second phase of folding (“F2”) striking NNE with shallow southeast dipping axial planes may influence the location of higher gold grades.

Intrusive related gold mineralization occurs along a 10 km trend on this part of the Zinger Property.

A pre-PJX historical 1,600 m long gold in soil anomaly occurs over the Gar Intrusive. The intrusive is largely covered by overburden and has not been drill tested.

The style of gold mineralization and intrusive appear somewhat similar in type to the Fort Knox gold deposit in Alaska. Fort Knox and the Gar intrusive target both have visible gold that occurs mainly in sheeted veins within Cretaceous granite that intrudes Proterozoic sedimentary rocks. Veins in both areas are influenced by regional northeast oriented structures and east-west and northwest trending faults. The sulphide content of veins is low in both the Fort Knox and the Gar intrusive, and gold mineralization is associated with elevated bismuth, molybdenum and tungsten. Associated hydrothermal alteration is not significant in either area.

Airborne geophysics has identified an area at depth where gold may be concentrated by the intersection of 2 phases of folding and cross faults. There is potential along the 6 km trend to discover multiple gold deposits. Rock units potentially favourable to host gold need to be mapped and projected to depth where the 2 phases of folding may intersect. These areas at depth should be targeted by drilling close to cross faults that have the greatest carbonate-sericite alteration.

Airborne magnetotelluric and magnetic survey results along with follow-up mapping and prospecting are planned to help define targets to drill.